“You are amazing. We bow down to you. We are trying to emulate what you are doing!”

In his opening words to a Lyndhurst meeting organised by the Friends of the New Forest the leading light of the British rewilding movement, Charlie Burrell, paid homage to the New Forest as a unique survivor of Britain’s ancient wild landscape. The owner of the now famous Knepp Estate in West Sussex revealed a quite surprising lack of knowledge of the New Forest, given the proximity of Knepp. Indeed, he was surprised to discover how close the Forest was to Southampton. Perhaps this is part of the natural tendency in Britain to look abroad for inspiration, and ignore the everyday extraordinary landscapes on your doorstep. Perhaps this is part of the New Forest’s problems, that its special qualities are so easily overlooked. This was a point made later in the meeting by Diana Westerhoff, Natural England’s appointee to the New Forest Court of Verderers: Much of what is so special and so rare in the New Forest can be hard to spot for the untrained eye, citing the examples of the multiple lichens that need hard-grazed lawns to survive.

To Charlie Burrell the scale of the New Forest free of fencing presents a vision of what could be achieved if experiments such as Knepp could be replicated on a larger scale, allowing the large herbivores to roam at will. Even the New Forest is a minnow in comparison to the truly wild landscapes of places like Yellowstone in the US. He explained the balance between scale and management intervention, so that the degree of active management required can decline as scale rises. Although 114km of internal fences have been removed at Knepp, so that the estate now has just three “blocks” of former agricultural land,  each of the three is managed differently, with grazing by pigs, ponies, cattle, and deer. Rewilding he said is “process led”, with no defined end-game, but seeing where nature leads. The estate now has about 700 deer grazing, including red deer which found their way there rather be introduced with the smaller species, given the initial concern that an injury to someone using a footpath could threaten the project. The deer, he said, are essential “fight back” against the vegetation, “to ring bark trees” and help maintain the open landscape.

The desire to introduce wild boar to Knepp was prevented by legislation of dangerous wild animals, but this did not stop Charlie Burrell wondering aloud whether bison might help the New Forest educate the public on behaviour in an open access landscape. Perhaps, one day they could be introduced on rewilded land adjacent to the New Forest, and maybe one day the fences would come down, so that the bison could start to change attitudes to wild landscapes and “rewild us”. 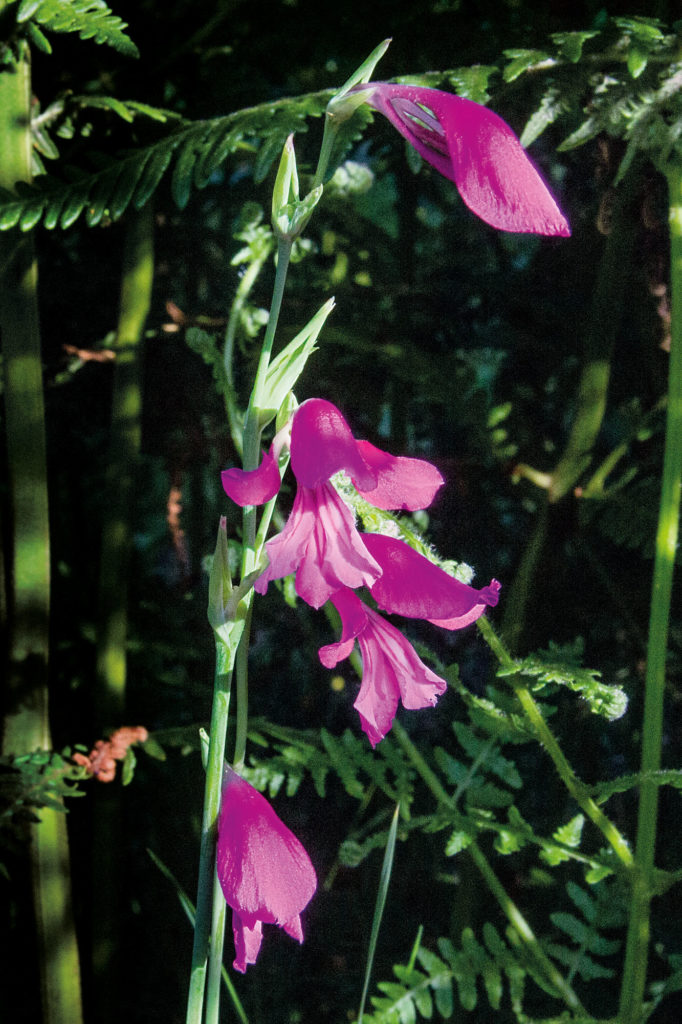 Our moment in time

Much of the questioning related to claims of “overgrazing”, including a lack of tree regrowth in pasture woodland, and suggestions that nature was in decline in the New Forest (One questioner was also under the false impression that ivermectin wormers are used in Forest livestock). Diana Westerhoff directly addressed these beliefs emphasising the multiplicity of competing species, many only visible to the expert eye,whereas Charlie Burrell pressed the need to take a long view for wild landscapes, where grazing pressures rise and fall over time. This is, he argued, “Just a moment in time. It doesn’t matter”. Movement and change, he said, takes place over a very long time.

Perhaps the topic of greatest consensus was education. Charlie Burrell told of young farmers visiting Knepp who were unable to identify common trees and Debbie Tann from the Hampshire and Isle of Wight Wildlife Trust pressed a case for “rewilding people”.  This is, she said, made harder by plans for excessive housing development around a protected landscape and widespread misinterpretation of the word “park” in “National Park”. Charlie Burrell noted that the greatest problem from visitors stems from dog walking, particularly with regard to ground-nesting birds.

Inspiration for the Future New Forest

What messages did the discussion carry for commoning? It certainly emphasised the value of redoubling efforts started under the New Forest’s current “Our Past Our Future” (OPOF) landscape partnership, funded by the National Lottery Heritage Fund. Not only is an Education Toolkit, bespoke for the New Forest, now being introduced to the curriculum in local schools, but the CDA’s Shared Forest project is finding new ways to engage with local people and businesses, and to share messages about valuing and protecting this very special landscape.

It also emphasised a need not only for enhanced monitoring of New Forest biodiversity, but also much better communication of what is already being achieved. Other OPOF partners are doing fabulous work on improving and monitoring biodiversity; not least the Freshwater Habitats Trust whose research is revealing not only the extraordinary cleanliness of ponds and streams in this traditionally grazed landscape but also the success of some of the little-known but exceptionally rare species that survive here but are all but wiped out elsewhere. There are also wonderful data coming from organisations such as Buglife and Plantlife, that need to be shared more widely. Monitoring of wetland restorations taking place under the Verderers’ Higher Level Stewardship (HLS) scheme are also now in the monitoring phase and evidence from these should be very useful as a guide to future management.

As these projects draw to a close the rewilding discussion has certainly hinted at some interesting initiatives that could be supported by a future Lottery bid and by whatever agri-environment scheme replaces the EU Basic Payments Scheme and HLS; better protecting some of the most tranquil and fragile habitats and species, experimenting with a variety of management regimes across the Forest’s amazing mosaic of habitats, and in the substantial enclosed lands of the New Forest (including commoners’ back-up grazing). The CDA has, of course, been working closely with its local and national partners to ensure that future support is best able to benefit the New Forest for future generations to appreciate and enjoy. This is certainly an exciting prospect in what Michael Gove described as an “unfrozen moment”.

This was all wonderful food for thought. Meanwhile we press on with “rewilding us”.