The law requires close control of dogs near livestock

The New Forest Commoners’ Defence Association (CDA) is advising commoners in the New Forest to dehorn their cattle. This unprecedented move comes after a series of serious injuries during 2018-19 involving walkers, mostly with dogs.

The Association’s chair, Tony Hockley, has written a letter to the 200 people who are registered to turn cattle out to graze the New Forest. Alongside the recommendation that cattle with horns are dehorned, Tony Hockley says that the CDA will be stepping up its campaign for better signage on appropriate behaviour around livestock, particularly the close control of dogs, and enforcement of law and byelaws related to this.

“People seem to have lost all connection with the countryside and any healthy respect for large livestock. It is wonderful that the extensive grazed lowland heath has survived here, whilst it has been lost almost everywhere else. It is now a habitat that is more rare than rainforest,  of global importance for biodiversity, Grazing by cattle is central to this. In the past the threat has come from development. Today it comes from thoughtless recreation. People seem genuinely unwilling to make even a small detour around livestock, and just to put their dog on a short lead around grazing animals. Yet the land is accessible to walkers because of the grazing.

“Over the years dangerous incidents involving livestock have been extremely rare. Yet, in the past two years there have been several. Commoning is a vocational activity. People choose to engage in it out of commitment to this special landscape, alongside their jobs. If someone is injured by a commoner’s grazing animal, it is deeply distressing for everyone involved.

“Poor behaviour by a few, makes potential victims of the many. One badly-controlled dog can make an animal defensive to other dogs, however well-c0ntrolled. We would urge people to inform the Police whenever they witness a dog out of control around livestock. It is illegal and reporting it helps protect everyone. 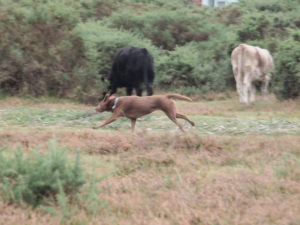 The CDA move on dehorning follows a packed meeting of cattle commoners on “Recreation and Cattle” held in September, hosted jointly by the New Forest Verderers and Commoners Defence Association. It was clear from this meeting that the general view was that something had to change, particularly the reintroduction of clear signage and enforcement of the New Forest byelaws.

“This was the one step that our Association felt we could take ourselves that might mitigate the harm done by the situation in which the New Forest now finds itself. Most cattle are already dehorned, which suggests that it is not something that would deter people from turning cattle out to graze. We decided to exclude British breeds for which horns are an essential characteristic, primarily English Longhorns and Highlands: As far as I am aware we have never had an incident involving these two breeds.

”Thus recommendation from the CDA does not override every commoners’ responsibility for decisions regarding their own animals, any risks to Forest users and the welfare of their cattle. Over time, however, we would hope that commoners will choose to use polled bulls in order to produce a herd that is free of horns, with maximum consideration for the  welfare of our animals.

“We are also talking to government, the Verderers, and local agencies about other steps on education of Forest users and proper law enforcement”.

The first of hopefully many sightings!! 🤞 🤞

A new salt lick trial has been put into place alon

Last year a parasite found in dog faeces led to 19

❄️ Merry Christmas from everyone here at the N

👉 KEEP YOUR DISTANCE 👈 ℹ️ During this