How do commoners catch their ponies?

Whilst all the ponies on the New Forest are owned, most are unhandled and cannot be easily caught. Commoners are highly skilled in handling these semi-feral ponies. Some ponies come in on the organised autumn round ups, known as drifts, however many parts of the Forest do not have a local drift and even where there has been a drift, ponies often evade capture. This year, because of coronavirus, drifts were only held in the areas where a stallion ran in 2019. There are many ponies remaining on the Forest which still need catching, particularly mares and foals, old or young ponies which need to come in for the winter.

At this time of year commoners are particularly keen to catch their ‘colts’ – all foals, whether male or female, are referred to as colts here in the New Forest. For a Forest mare, overwintering a foal is hard work and many commoners prefer to bring the mare and foal in to run the smallholding together or to wean the foal. This is where the foal will learn to eat hay, wear a halter, stand quietly to be groomed and to feed and drink from a bucket.

Commoners will often ride out in small groups to catch individual ponies; this is known as colt hunting and requires skill. Commoners will ride out quietly to identify the ponies which need catching, closing gates to inclosures and underpasses to prevent the ponies from escaping on their way. It is critical that gates are always left as you find them in the New Forest other than those which open on to the fenced roads which should always remain closed. Some pounds are located on main tracks and paths. The pound at Backley is one such pound. Please, please, if a pound has been set up with a gate closed, leave it exactly as you found it.

Once located, a plan will be made… Sometimes they will drive a group of ponies together or may separate out a mare and foal or an individual pony. Commoners know the Forest extremely well; they know the best places to catch ponies and where the ponies will try to evade them. Commoners often call loudly, known as ‘hollering,’ to push the ponies on in front of them or to drive them out of the woods. Each commoner has their own ‘holler’ and it often changes when ponies start to get away. Those commoners left waiting at the pound to shut the gate always know when it is going badly by the urgency of the hollering. Whilst it may sound wild, the hollering is a bluff, making the ponies think that there are several riders rather than only one or two. Commoners always need a plan B and a plan C, D and E! There are usually several options of where to drive a pony to catch it.

People are often concerned that herds are split up by colt hunters, but ponies will always find their way back to their friends and family members. Often when they are pushed out of their area, they are easier to catch as they are less familiar with their surroundings. Ponies can be caught a day or so after a round up or drift as they make their way back to their haunt, spotted by eagle-eyed commoners who pass them in the road or spot them whilst out riding. The Forest ponies enjoy a good gallop and know that autumn is drifting season. At this time of year, their heads go up and their tails lift whenever a rider approaches; as flight animals they are always on guard.

The ponies play a critical role in managing the precious habitats of the New Forest.

There are good days and bad days for the colt hunter and sometimes they return home empty handed. It is of vital importance that Forest ponies remain wild. Unhandled ponies tend to favour the more remote areas of the Forest and will avoid people, which is vital for their conservation grazing role.

In days gone by, commoners had many places to catch ponies, as most smallholdings were owned by commoners and had a pound or lane to catch ponies in. However, many smallholdings have been sold away from commoning, while others were fenced out of the open Forest when it was fenced and gridded. Few people understand what a massive loss this has been to the Forest and how it has impacted on commoners’ ability to catch their ponies. Instead commoners are reliant on driving their ponies to the wooden pounds located across the Forest. Some of these are in quite remote locations away from the roads. Family members are often posted in key places, perhaps a road crossing, a gap in a fence or at the pound. These long-suffering walkers will often wait for a couple of hours without seeing a pony. They will then get a call from a tired colt hunter requesting the truck and trailer be brought to load a pony at a pound which was miles away – the pony having taken them in the opposite direction to the one planned.

Sometimes things go to plan, sometimes they don’t. There is nothing more frustrating than reaching the access gate to the pound only to find that someone has parked in the gateway.

There are other ways to catch ponies and the quiet, easy way is always the best option. We have a cattle barn at the end of a long track and we always leave our gate open when we are working there in the hope that it will draw the ponies in to graze the verges of the track. Many a pony has unwittingly given themselves up this way!

In the summer when ponies are quieter, they can be caught in the shades with a rope on a long stick or dangled from a tree, but these methods are used by just a handful of very skilled traditional commoners now. In winter, some commoners will use hay and a hungry pony will follow down a driftway or a road and are captured – this method takes patience and time. Each day the pony trusts the commoner just that little bit more. Some commoners will spend days leaving a bit of hay for the pony to eat until one day it is in just the right place to be caught.

Commoners have day jobs and their children are in school on weekdays. They carry out their commoning activities in the evenings and at weekends when all members of the family are free to help. It is critical that all Forest users recognise that they can meet fast moving ponies and riders on any day of the year, but especially at the weekends in the autumn and winter months.

Commoning children often start their pony catching training by helping mum or dad catch a mare and foal in the autumn. Colt hunting is often a family affair, with everyone playing their part whether riding or walking. Some families have been catching ponies together for generations.

The New Forest is a working Forest 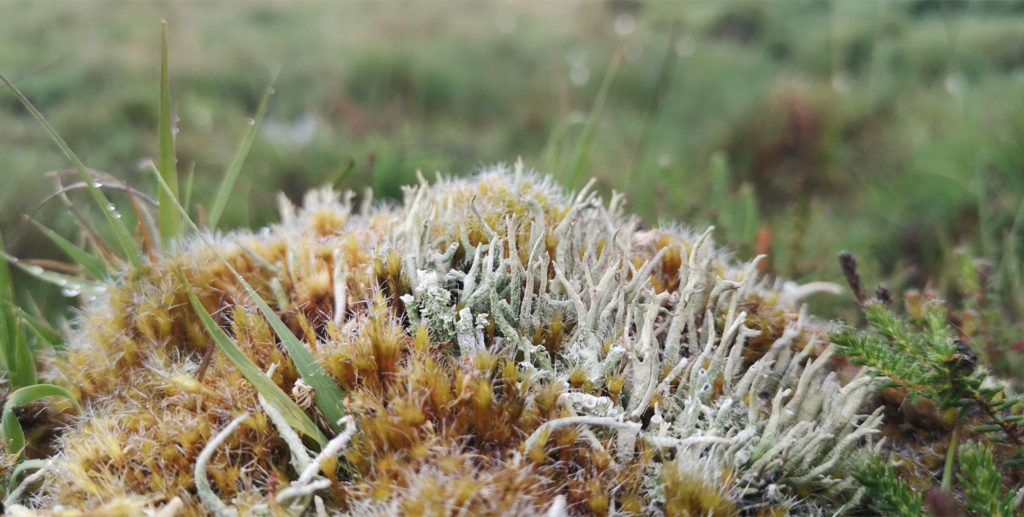 The grazed lawns of the New Forest provide the perfect conditions for many species including mosses and lichens.

The ponies play a critical role in the management of the New Forest. The continual grazing by commoners animals over hundreds of years has ensured that many different species of flora and fauna continue to thrive here in the New Forest despite being nationally rare.

If you are lucky enough to spot commoners at work managing their animals in the Forest, you are witnessing a traditional practice which has gone unchanged in many ways for hundreds of years. However, as soon as you see fast moving animals, please find a safe place to stand quietly and watch and if you have a dog with you, put it on a lead for its safety. Always park in a car park and never park in front of a gate or barrier. The Forest that we all know and love is only the way it is because of the animals which graze it and those animals occasionally need catching.

How to report a problem

If you ever see a pony, cow, pig, sheep or donkey on the open Forest which you have concerns about please contact the Verderers during working hours  on 023 8028 2052.

For road traffic accidents call 999 in an emergency or 101 for non-emergencies.

Remember any accident involving a commoners’ animal must be reported as soon as possible, even when an animal looks unhurt as they may have internal injuries and must be checked by their owner and the Agister. 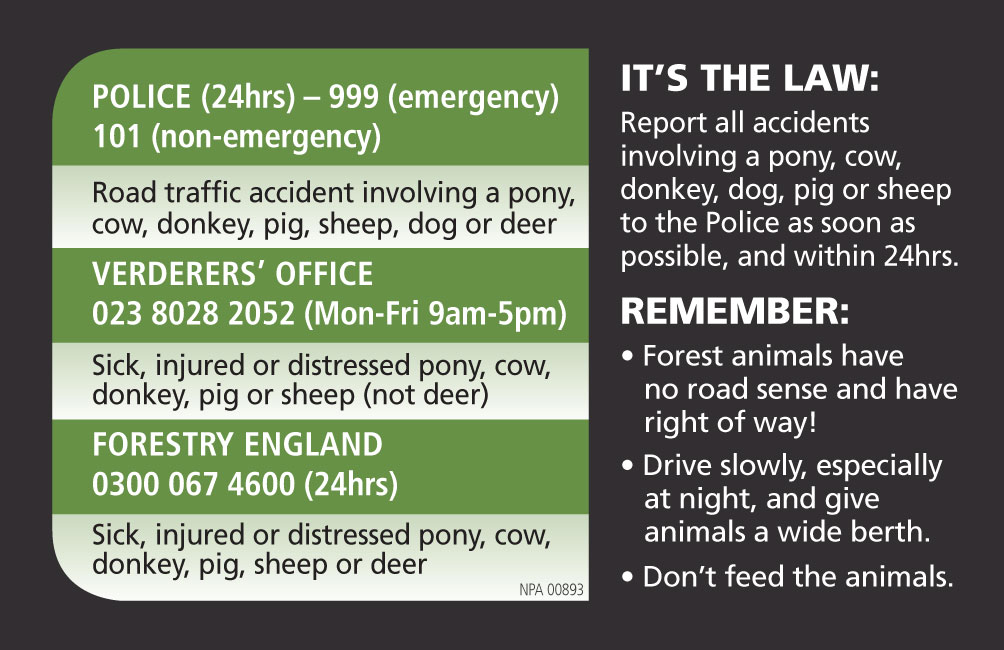 #protectourfoals 🙏 Tragically this morning a

Meet Amber a New Forest foal. She is celebrating h

🐴 It is that time of year again where we start