The nuts are falling

October brings the autumn winds, the acorns and beech mast begin to  fall providing a feast for the pannage pigs. Commoners with the right of mast are allowed to turn their pigs out for the pannage season. Sixty days minimum but this can be extended depending on the acorn crop. Whilst the acorns are poisonous to the ponies and cattle pigs thrive on them. 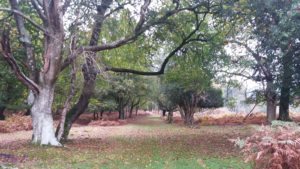 Commoners often talk about the ponies ‘ash leafing’. Ponies are often drawn away from their usual haunts and in to the lanes in search of this tasty treat often making them easier to catch.

Many commoners choose to bring their animals in to the holding in October to graze the fields which have been laid up since the summer hay making. Some begin calving at this time too.

October also sees the drifts in full progress. Mares and foals caught at the drift are taken home to the holding in preparation for the foal sale at Beaulieu Road, to be handled or to be put in to some grass. It is a busy time of year for commoners who often have to take annual leave from work to attend the drifts during the week. Commoners really appreciate the co-operation of the public during the drifting season, which can make the difference between success and failure in a local round-up.

A few commoners still cut bracken for cattle bedding. This once common practice has been revived in recent years. Bracken cutting provides a good quality robust bedding but also benefits the flora and fauna of the Forest, particularly Wild Gladiolus which is a rather fussy plant, requiring a little but not a lot of bracken cover.

October is a month of preparation. Hedges need cutting and fencing needs checking and repairing in time for the animals to come back on to the holding in the short days of winter when getting on to the fields with a tractor becomes tricky. 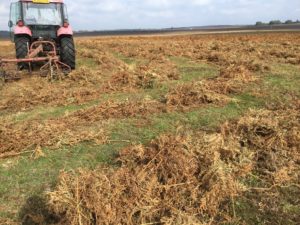