What’s the New Forest done for us?

The past three years have given ample time for Britain to think about what a break from the Common Agricultural Policy (CAP) could mean for the countryside and nature. Could the huge amounts of taxpayers’ money that go to the largest landowners be better used?

In the New Forest the CAP’s Basic Payments Scheme has provided a valuable boost to the commoning system, allowing struggling commoners to invest in their back-up land, facilities and herds; all within Britain’s least affordable national park. This has been of immense value since the devastation to the vocational New Forest system of commoning wrought by Foot and Mouth Disease restrictions on cattle in 2001. The BPS does, however, encourage any farmer who occupies land with historic Forest rights to mark their cattle for the open Forest and claim against the Forest’s BPS entitlement – in addition to their entitlement over their own land. This is regardless of any commitment to the Forest and its commoning system. Every animal marked simply to claim additional support means more of the money intended to support the landscape is taken away from it. With a fixed amount based on the “eligible area” of the New Forest (a Brussels saga in its own right), every extra animal marked by the agisters means every commoner’s animal attracts less support.

A new system should bring an end to this nonsense. Public money intended for the New Forest should directly benefit the Forest. Michael Gove, as Environment Secretary after the 2016 Referendum, set out plans to transition from the current system to one of “public money for public goods”. This is a principle with broad support, not least in the New Forest.

This, of course, raises two important questions: “What are the public goods delivered by the New Forest?”, and “How can public policy best conserve and enhance these?”. These need to be addressed in that order for obvious reasons.

Thankfully the protracted political debate since 2016 and the promise of several years of transition between systems have offered time for commoners and our local partners to try to answer the first of these questions. This has not been easy. The New Forest is a complex landscape, with a rich mosaic of connected grazed habitats. These include heaths, wetlands, woodlands, freshwater ponds and streams and coastal saltmarsh. It is inevitable from this extraordinary mix that the range of public goods is also complex and interconnected. Prioritising one can harm another. The consistent vocational tradition of common grazing and its associated land management is, of course, the thread that links it all. But commoning too shows a rich variety across the landscape. 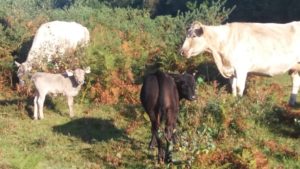 As a first step a group of local partners known as the “Forest Farming Group” has worked with a respected rural consultant, Robert Deane, to produce a paper that attempts to catalogue much of what the New Forest delivers for the nation. Our hope was that this would provide a sensible starting point for a conversation around the ambitions that could be set for the future and the financial support that would be needed to deliver these.

Whilst the language of “natural capital” is adopted, this is in no way an attempt to put a financial value on the New Forest. To do so would draw us into the potentially endless academic argument that embroils such attempts. It would probably be an impossible task, with a result that would convince no-one. We could just as easily have used the alternative language of “ecosystem services” to achieve the same outcome, but it is always best to use the current language of policy. Our aim is simply to start the important discussion of the future of this extraordinary landscape, with a better understanding of the breadth of its value and the interplay between specific outcomes.

A prime example of this interplay lies in winter poaching in some areas of the Forest by cattle. On the one hand areas of poached wet soil are vital to the survival of several rare species for which the New Forest is now renowned. The Small Fleabane is the species most often cited, but it is not the only example. On the other hand these areas may sometimes offer reduced accessibility to the general public when they are poached. There is a trade-off between these two outcomes. 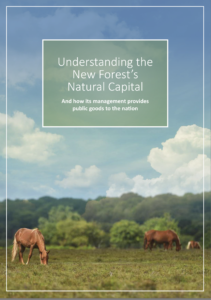 None of this is simple. At the time of writing there is a General Election contest going on between political parties; arguing over who can commit to planting the most trees. It should be informative to this contest that the New Forest (of all places) is currently restoring biodiversity by removing past planting of inappropriate trees that have been harmful to nature: Heathland is one of the world’s rarest and most important habitats. Wetlands and saltmarshes too are vital carbon stores. Cultural heritage  is also a vital component of iconic areas of Britain’s countryside, and in some such as the New Forest it is the base upon which everything else depends. These are complex inter-relationships that need to be properly appreciated, understood, and addressed.A over-zealous single policy focus will neither achieve what is needed, nor even what is (currently) desired.

The “natural capital” paper is just the start of this conversation. With a little support we can have time on our side. The BPS will only be phased out over several years post-Brexit. At the moment we are making the case for the Verderers Higher Level Stewardship (HLS) scheme to be rolled forward, until we have a successor scheme in place, as has already been done for the National Trust HLS on the New Forest Northern Commons. A huge amount has been pioneered and learnt from the HLS work in the New Forest, on very practical ways to support commoning, as well as on restoring nature. We’ve also learnt much in the Heritage Lottery-backed landscape partnership, particularly on engaging people with the New Forest, so that it is better appreciated and understood. This partnership work puts us in a strong place to start working out how we can do much better in the future, balancing and enhancing the public goods that the New Forest gives us.

🎃 Although Halloween is over, the scary times h

⚠️ The extreme weather conditions we are exper

⚠️ - Pumpkins can cause choke in ponies and do

Did you know the New Forest is home to around 2700