Burning on the Forest: Controlled and Wildfire

The traditional burning season is just getting underway and I wanted to highlight the massive difference between the controlled burns that are carried out at this time of year, as opposed to the wildfires that are often started accidentally (or deliberate arson) but almost always happen at a time when a huge amount of damage can be caused.
Gorse and heather needs to be controlled to keep it healthy and flourishing – when it gets too old and tall it becomes far less ‘useful’ and deteriorates into a barren habitat – and an increased fire risk in a dry summer.

There are some areas that are mowed instead of being burned but this is done to complement the burning, not replace it. The problem with mowing is that it can put a mulch on the ground, which enriches the soil and this is undesirable in the Forest. Burning ‘cleans’ the ground of general debris and rubbish and can actually help with germination of dormant seed – but burning cannot be carried out under power lines for instance.The areas to be cut and burnt each year are selected (often from commoners suggestions) inspected and approved by a number of organisations during the summer. Then, in autumn or early winter, the ‘traces’ are mowed out. These are to define the area to be burnt by providing a fire break of very short herbage so that the fire naturally dies/can be stopped from spreading out of control.For the actual process of burning, there are all sorts of factors to be taken into account:-

The fire brigade has to be notified with the precise location – sometimes they choose to attend as part of their training and experience in dealing with scrubland/heath fires.
Notices have to be put out to inform the public of a controlled burn.

Areas burnt at one time tend to be quite small (a few acres) but, especially when the areas are slightly larger, the site has to be checked over to make sure that no livestock are present.
The burning is usually done into the wind (this is known as back burning) rather than with the wind. This enables the fire to burn a little bit slower, hence more thoroughly, and makes it easier to control.

The forest wildlife needs a patchwork mosaic of different heights, ages and densities of vegetation for the best biodiversity. The relatively small, controlled burn, areas are quickly recolonised from all sides. 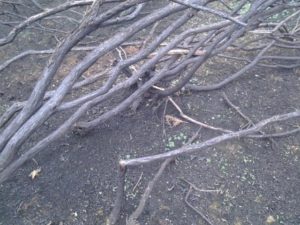 2. Six Months after a Wildfire

So, let’s compare the controlled burning to the wildfires. I would describe the difference between the two as a controlled ‘cold’ burn and a ‘hot’ wildfire. The controlled cold burn is done at the correct time of the year, when the ground is sufficiently damp so that the soil/peat/top layer does not get burnt. The wildfire hot burn frequently occurs during the dry summer and so the fire damages the top soil layer (and occasionally even deeper)

Controlled burn areas provide another nutrient/food source for the livestock at a time of year when it is extremely beneficial. Wildfire often burns too completely (due to the higher heat) to leave much that is of any benefit.